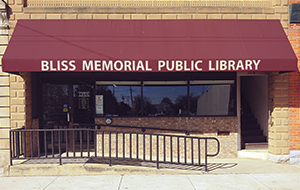 The Bliss Library was organized in 1935 mainly due to the efforts of members of the No Name Club, a literary and study club in Bloomville. It was organized as a school district library and was called the Bloom Township Public Library. The Bloom Township Trustees provided the building at 35 S. Marion St. The first library board was named as follows: Mrs. H. J. Pore, Mrs. J. L. Kagy, Supt. R. R. Miller, Mrs. J. J. Sullivan, Mrs. Charles Hunsicker, Mrs. Rolla Zutavern and Mrs. G. H. Souder.

After a fire above the library in 1967, the library was moved to its present location across the street in larger quarters provided by Mr. and Mrs. W.Edson and Fern Bliss. The library was re-named the Bliss Memorial Public Library. A second room was added in 1973. In 1974 the library joined NORWELD.

A major remodeling project was undertaken in 1997 with the installation of all new shelving, carpeting, and furniture. An Open House was held on September 12th and early on the morning of September 24th a devastating fire destroyed the back one-story section of the library which housed our non-fiction collection and our magazine archives. Almost 8,000 books were lost.

Construction began almost immediately to replace the lost area. With the addition of 12 feet of length and almost 4 feet in height, the new area is much larger and brighter. We are very grateful to the many volunteers who put in hundreds of hours helping to list lost books and identify them for replacement.

The library joined the SEO Consortium in 2000.  They are a group of over 95 libraries who share a database.  Borrowers in good standing may Inter-library Loan any item in the database and it will be shipped to Bliss Library by Priority Dispatch delivery 3 days a week.